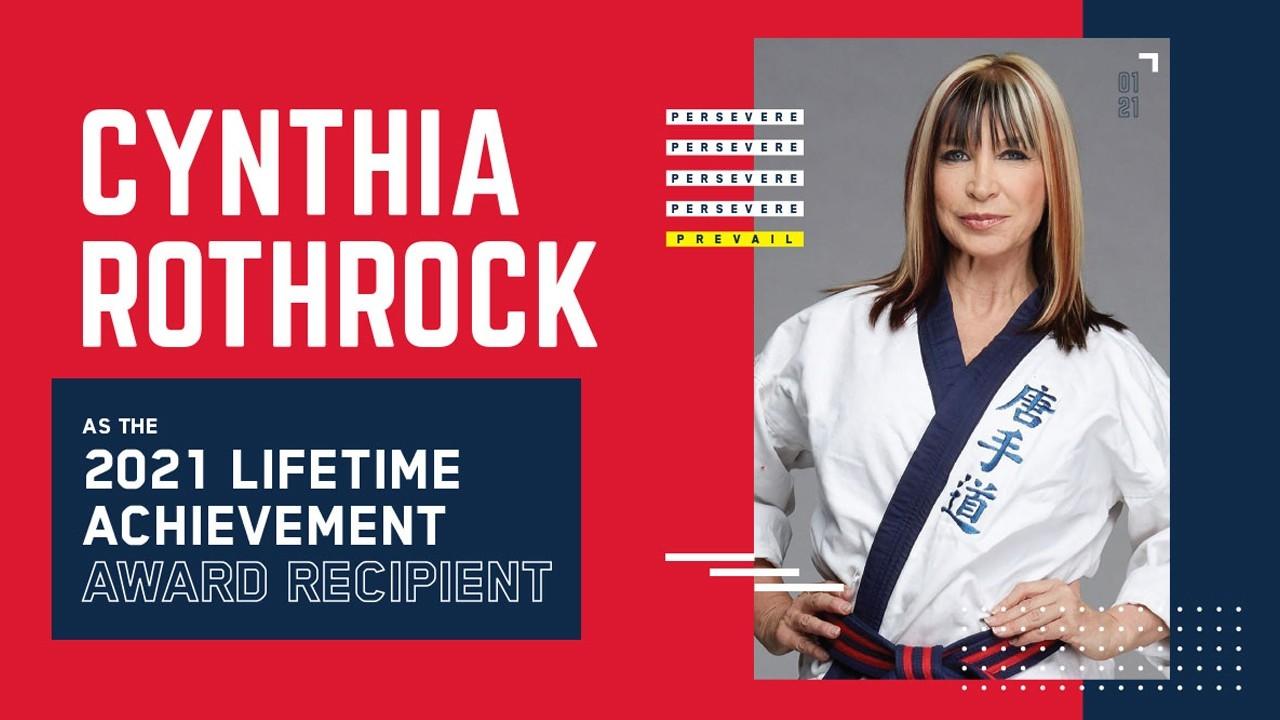 A lifetime of achievement...and then some.

In my previous post, I had mentioned (too briefly) that the 2020 recognition for Lifetime Achievement, my favorite event of SuperShow, was going to Cynthia Rothrock. Those in the know probably thought at first, “Again? Surely she already has one?” I mean she does win a lot, so I don’t blame you. She’s been responsible for a shocking amount of firsts in martial arts. We are honored to provide her her first L.T.A.—though at her astonishing pace, I wonder how one measures a “lifetime” for achievement.

Cynthia Rothrock has had a long and meaningful career, the envy of most. Theatrically she has acted alongside prestigious company: Brigitte Nielson, Vivica A. Fox, and Michelle Yeoh among them. She has appeared in commercials and television shows since the 80s promoting the accomplishments of master athletes and spent her competitive career as a continual Grand Champion in weapons and forms for years (5 in a row at one point!). In her first 38 forms tournaments, she won 32 of them—if she were a baseball player, that kind of average would build an entire franchise.  Cynthia Rothrock is so much a paragon of athleticism that she also was the first martial artist to be inducted into the International Sports Hall of Fame. The first. No other qualifier.  Think about it.

Less grandiose, but far more important, she has earned seven black belts. Seven. As in, a black belt and then six more after that. I only have one, and it's got a buckle…  not even a designer brand…. But who wants to compare themselves to one of the industry’s best. Her first black belt (in Tang Soo Do) is an 8th degree! I can’t just count that as one. I don’t know the math on that; I just know that with that many black belts, it was pretty much a given she was going to be an inductee into the Black Belt Magazine Hall of Fame. Which she did in 1981, only 2 years after she appeared on its cover. No surprise there.

It is also no surprise that her receiving of an award for a lifetime of achievement lines up so perfectly with one of the most trying years of recent memory. Cynthia Rothrock has demonstrated nothing but hard work, perseverance, and grit since she started as an aspiring martial artist in Pennsylvania. She has been a constant example, no...the example, of breaking barriers. For the 2021 SuperShow, the Lifetime Achievement Award could not have gone to a better athlete and artist. If it were possible, and something tells me she’d figure it out,  she’d be the first to win two*.

*Upon further review, it appears she did receive 2020’s LTA before it was canceled for COVID-19 reasons. So… yeah… wow.

Join our mailing list to receive the latest news and updates from our team.
Don't worry, your information will not be shared.