In August 2021, HBO’s Real Sports With Bryant Gumbel aired a segment titled “Force for Change.” The 20-minute-long portion of the monthly newsmagazine dealt with the search for a solution to the problem of excessive force being applied during arrest-and-control procedures.

HBO’s report eventually took viewers to an MMA cage to present an unlikely solution that could enable the police to get a better grip on the problem using a traditional art from Japan that came to America via Brazil: jiu-jitsu. As all martial artists know by now, the grappling system teaches unique methods for controlling an opponent using only the minimum amount of force.

The cameras wisely focused on Damon Gilbert, a 25-year veteran of the Oakland (California) Police Department. As an eighth degree black belt in kajukenbo and a certified Gracie Survival Tactics instructor, the Black Belt Hall of Famer was just the martial artist to provide analysis and commentary 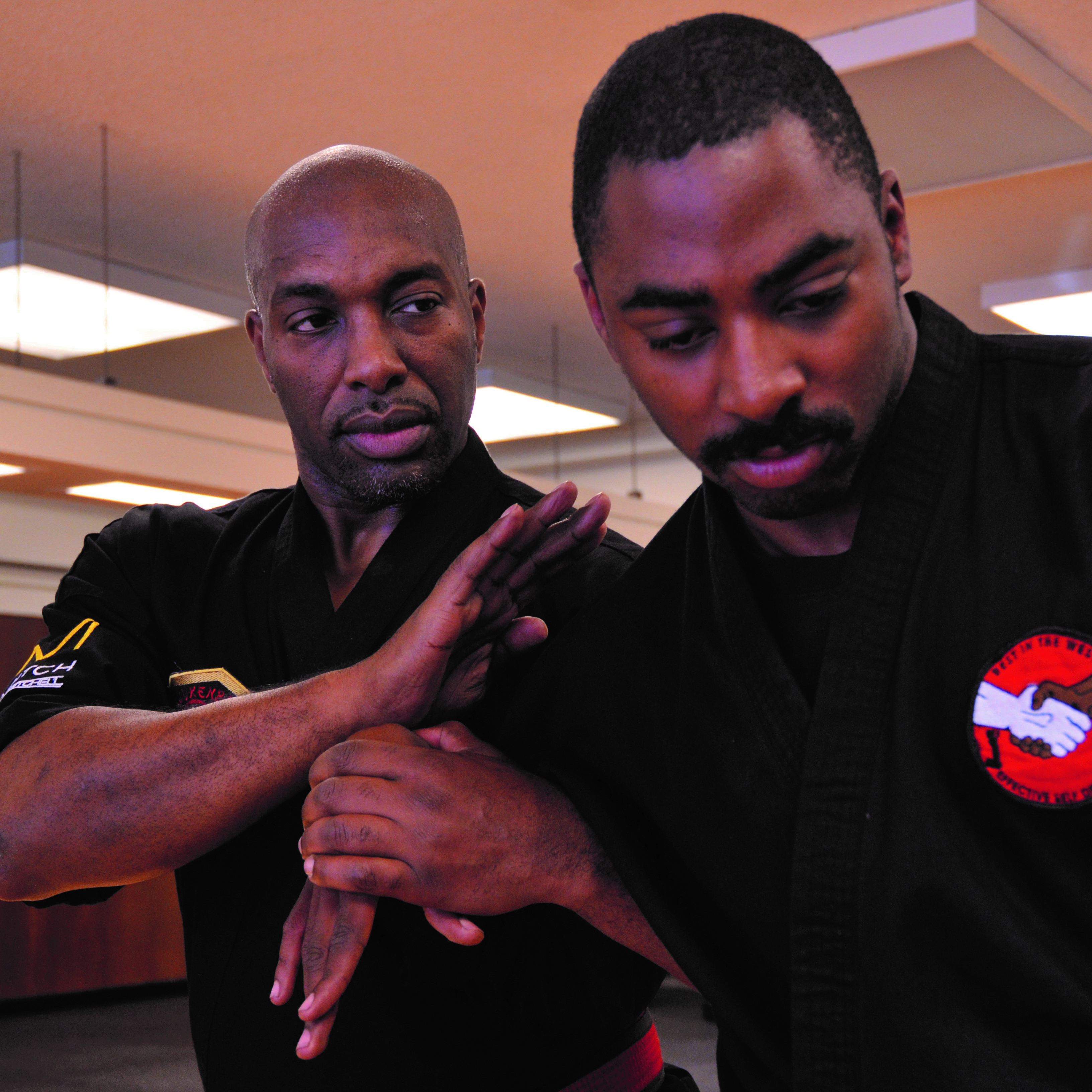 “I think the Real Sports piece was a big win for law enforcement, especially for those agencies that will become proactive when it comes to reasonable use-of-force and de-escalation tactics,” Gilbert said.

“The segment allowed us to show law-enforcement agencies everywhere that we are proactive. We want to help and assist, to make it safe for the officer, the suspect and the community. And what better way to do that than to use the great concepts and principles taken from Brazilian jiu-jitsu programs?”

Gilbert’s goal: Convey the effectiveness of BJJ holds, which never resort to excessive force but still allow body-to-body control — and thereby sow the seeds for police officers around the country to update their tactics.

“There are police departments still following procedures that have been in place for 30 or 40 years,” Gilbert said. “Those old rules of engagement may be very punch heavy, elbow heavy, knee-strike heavy and baton heavy. HBO focused on new methodologies that have been proven effective, not only for the officer’s safety but for the subject, as well. This is a win-win for law enforcement and civilians alike.”

When it comes to learning a new defensive-tactics system to replace what you’ve been doing possibly for years, you can’t expect to become an expert overnight. The key is given in the tongue-in-cheek response to the old question, “How do I get to Carnegie Hall?” The answer, of course, is “Practice, practice and more practice.”

“Training, training and more training is necessary to stay up to date on what’s current and what’s new when it comes to control procedures,” Gilbert said. For that reason, he added, the

Gracie Survival Tactics program has been a game changer for his department.

“Over 10 years ago, I started my training in Gracie Combatives,” he said. “A few years after that, I took my first GST class, and it was Rener Gracie who suggested that I offer our officers multiple training sessions every month. We’ve been doing that for more than seven years now, and I have seen our department’s use-of-force levels, officer injuries and injuries to subjects go down drastically.”

Rener and his brother Ryron Gracie, sons of Rorion Gracie, have shared the techniques, concepts and methodologies of GST with law-enforcement agencies around the world.

“The Marietta, Georgia, police department has received funding where the city pays for officers to train in BJJ,” Gilbert said. “Their numbers and stats were staggering after implementing GST — 48-percent reduction in injuries to officers and 53-percent reduction in injuries to suspects. The data also showed that there was 200-percent more chance of injury to a subject by a non-BJJtrained officer. It was unbelievable how quickly they improved after implementing BJJ into their program.

“The success we’ve had has been noticed by other departments. They know that we have an effective system and we are willing to help.”

As a veteran Oakland cop, Gilbert understands that change takes time and starting a jiu-jitsu program may seem like applying a Band-Aid to a gaping wound, but it’s a start. “As law-enforcement officers and martial artists, we are trying to do our part,” he said. “Will jiu-jitsu training exclusively help regain community trust? No. But it’s one of many steps that need to be taken to achieve that — especially when you are talking about neutralizing violence, repairing relationships between law enforcement and the community, and having a reverence for human life.

“The first thing we need is to correct the willingness to admit that there is a problem, which is a deficiency in law enforcement across the country. A lot of that spins from our lack of consistent training and the lack of effective training, and that is what we’re trying to address on a worldwide platform.

“To be calm and effective under chaos comes from having the proper skill set and mind set. It doesn’t just come magically after you are issued a badge and gun.”

A non-martial artist might view an MMA match and see jiujitsu as nothing more than a tool being used in a “street fight.”

To understand its real value, the uninformed would do better to watch a judo or jiu-jitsu contest in which victory comes from submitting an opponent without the use of strikes, kicks or elbows.

“A jiu-jitsu-influenced program is all about controlling a situation with as little force as possible,” Gilbert said. “[It] teaches officers how to respond when they’re under attack.

“Instead of using mace or a baton, trainees learn how to defend using basic grappling escapes when on the ground or from a mounted position and how to get out of head locks. We instruct officers on how to work from positions of advantage such as the mount, side mount, guard and standing position, and how to defend against two or more attackers.

“And to reverse that scenario, we teach how to effectively use two officers when you have one attacker or an arrestee that’s trying to flee or fight.”

Affirmation of his point comes from a clip in the HBO program that shows a suspect with his hands clasped to avoid being handcuffed. A crowd of screaming citizens gets dangerously close, recording the struggle on video as the two arresting officers punch the suspect repeatedly in an attempt to separate his hands so they can cuff him.

That’s Gilbert’s cue to explain how, using jiu-jitsu, that situation could have been controlled without excessive violence, thus creating a safer outcome for everyone involved. “We teach leverage-based techniques,” he said. “That way, the officer doesn’t need to use an impact weapon like a baton.

“In this situation, the officer could have used his knee as a wedge, creating distance on the suspect’s arm to control the wrist. That [would] allow the officer to remove the suspect’s hands from beneath his body without the need for a higher level of force.”

The GST program addresses every aspect of dealing with a combative or resisting person, whether that person is standing or on the ground, at medium distance or close quarters, using a weapon or attempting to take one away from the officer, Gilbert said. “The person who manages the distance manages the damage, so we really get into all those aspects of training for law enforcement.”

Before a recruit has a badge pinned to his or her uniform, that person has to undergo mandated training and testing, the specs of which were created by the commission on Peace Officers Standards and Training, or POST. The group includes police officers, deputy sheriffs, school-district officers and district attorney investigators.

“With any defensive-tactics program, a person must attend and pass a POST-certified defensive-tactics instructor course,” Gilbert said. “When I took it, the course was two weeks: 80 hours of instruction [with] physical, written and oral tests. Then after passing, a certificate of completion was issued. Afterward, there was updated training that had to be completed to maintain the POST certification.”

Presumably, it will be similar if and when jiu-jitsu is adopted. “You can get a certificate to teach your cadre, but you also need to continue with the additional training to stay current,” Gilbert said.“ The biggest hurdle in law enforcement is the lack of training.”

An annual refresher isn’t sufficient — which is why it’s essential to have certified instructors who keep their training up to date, he added. “This is how we’re going to reduce the negative issues related to excessive force.”

In addition to his years of martial arts training and teaching, Gilbert is a certified instructor in GST, a multi-level course that’s based on Gracie jiu-jitsu and that incorporates time-tested techniques designed to enable offices to prevail against larger and stronger opponents using many of the non-striking techniques seen in MMA matches.

“My career in martial arts started with kajukenbo, a mixed martial art that consists of karate, judo, jujitsu, kenpo and boxing,” Gilbert said. “Because I come from a mixed-martial arts background that incorporates judo and jujitsu, learning Gracie jiujitsu was the icing on the cake for me. I have been addicted to expanding my growth in Gracie jiu-jitsu ever since.”

In addition to holding 14 world titles in sport karate, Gilbert is a subject matter expert on use of force, a certified litigation specialist and the lead defensive-tactics instructor for the Oakland PD. As such, he believes that martial arts should be a mandatory component of the training all police officers undergo.

“I have always had an arrest-and-control base curriculum at my school,” Gilbert said. Many of his law-enforcement clients are from the greater Bay area, and they appreciate that he’s created a program specific to their needs under California’s regulations.

“It’s important to have a high-level, hands-on, experienced defensive-tactics instructor with a credible martial arts base - that’s why I believe that the GST format should be implemented wherever possible,” he said. “When I started to study new concepts from Rener and Ryron Gracie, my knowledge base was greatly expanded, allowing me to better instruct those in my cadre. It’s also been a great learning process for me because I am a student for life. All the additional training is a way for me to keep my sword sharp because the biggest issue for officers is complacency.”

Gilbert’s faith in the solutions that the martial arts offer runs deep; his dad was a cop and a black-belt instructor, too. Both men relied on rigorous training to keep their skill set as sharp as a tack.

A few years after connecting with the Gracies, Damon Gilbert ramped up his dad’s old program. “I created a program for the Oakland Police Department called Open Mat Training that embraces and expands our jiu-jitsu base,” he said. “On top of the one mandated class a year, we now teach approximately six classes each month that are two hours in length. I also teach defensive tactics at my school Best in the West Martial Arts Academy in San Leandro, California.”

Law-enforcement officers throughout the state are fortunate to have access to such an instructor. If you’re a police officer who would like to learn more, call Damon Gilbert at (510) 347-2939. If you’re a civilian who would love to learn what the police learn, well, you’re out of luck.

“I teach that [program] strictly to security, personal-protection and law-enforcement personnel,” he said.

To read more from this article, subscribe to the MASuccess Magazine, here.

About the author: Terry L. Wilson is a multiple Emmy Award-winning show host, freelance writer and martial artist. To contact him, send an email to [email protected].

Plus! Catch Damon Gilbert at the 2022 Martial Arts SuperShow in his hands on seminar, Training and Tactics: How to use martial arts in law enforcement to deescalate. Learn more at www.masupershow.com.

Join our mailing list to receive the latest news and updates from our team.
Don't worry, your information will not be shared.